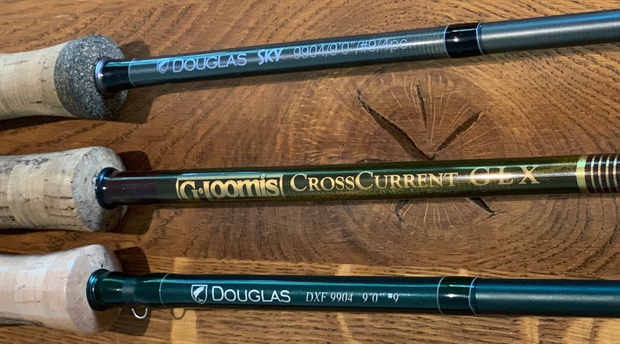 Thanks to Wading Waters(www.wadingwaters.com), I recently had the privilege of taking the new Douglas Sky and DXF fly rods to Ngombe Zambezi River Lodge(www.ngombelodge.com) to test them on some of Barotseland’s big tigerfish. I fished both rods in 9-foot, 9 weight configuration for 2 days each and fished short spells with my trusty G. Loomis GLX in between for comparison. All three rods were fished with the same Tibor reel and 300gr fast sinking line and leader setup. 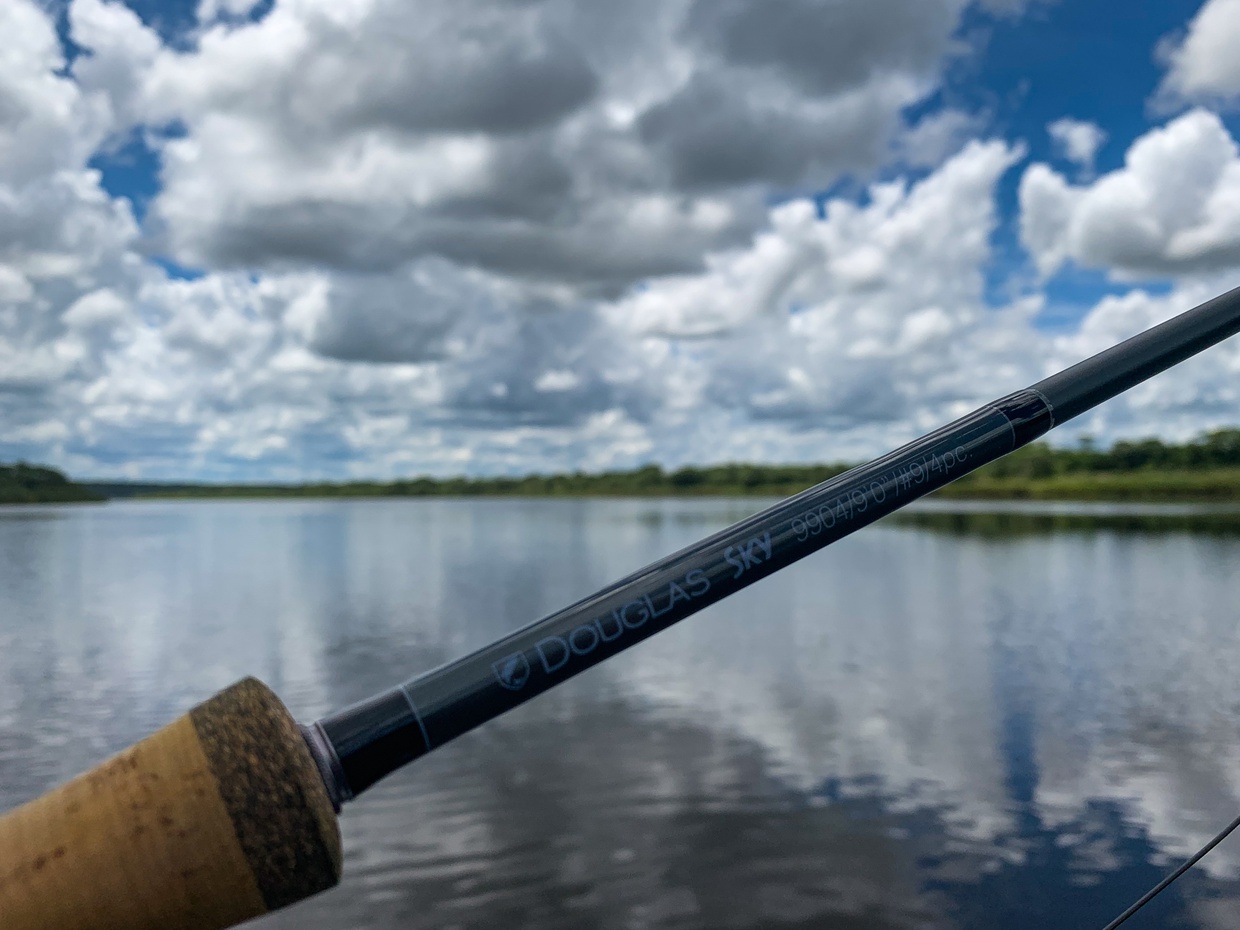 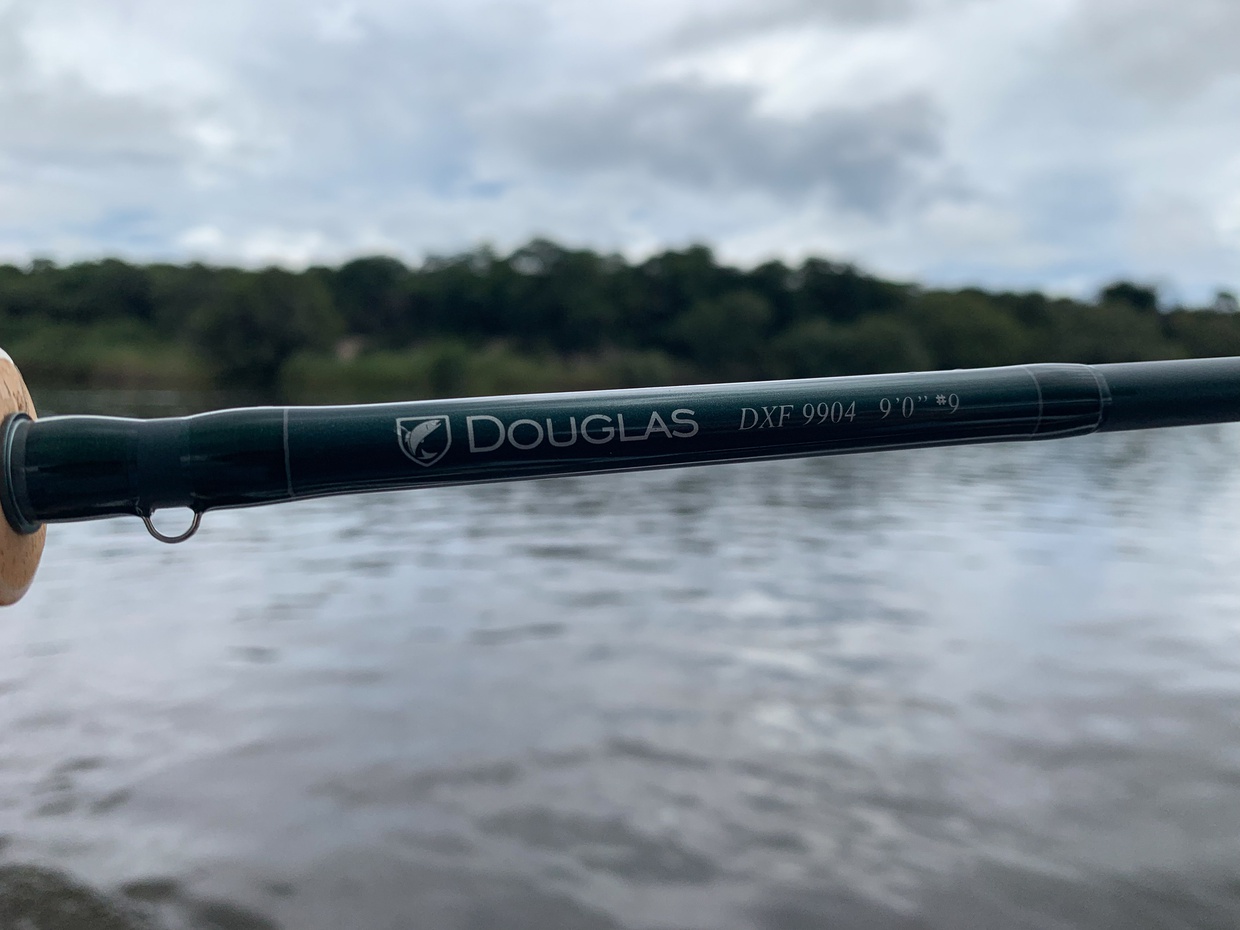 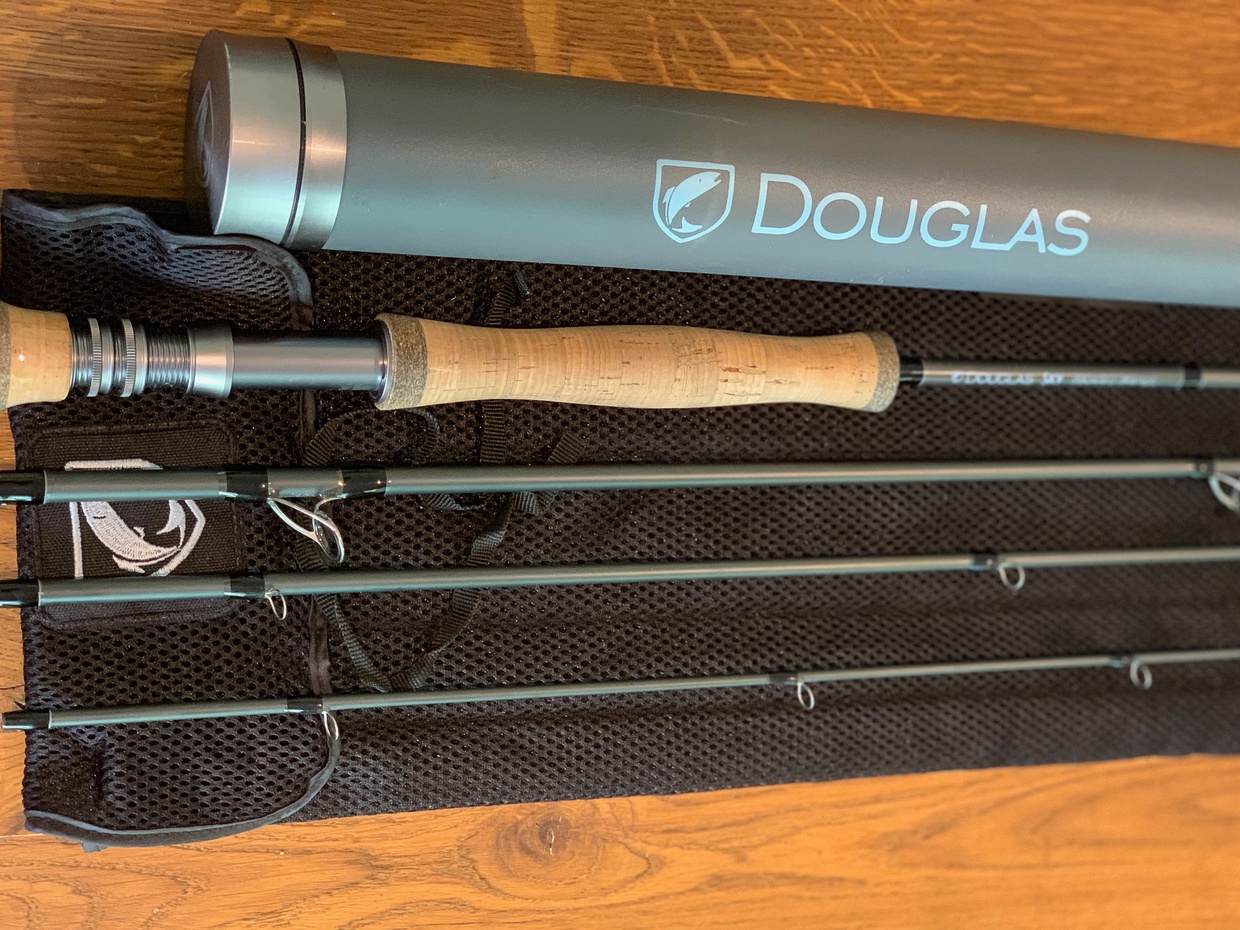 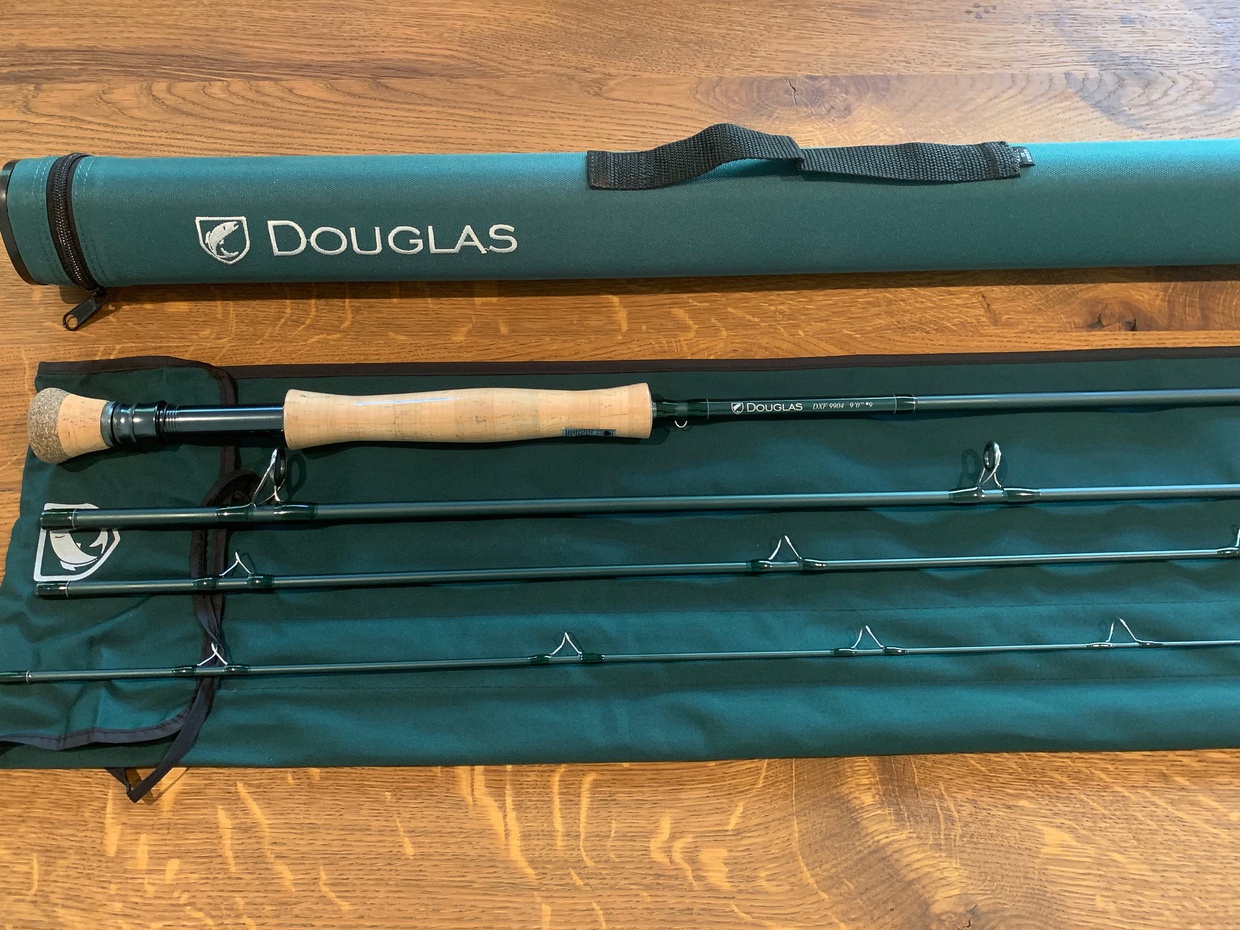 The sky comes in a very high end and attractive aluminium rod tube paired with a cushioned mesh bag, that’s not just impressive but functional, you immediately know that this is a high-end rod. The DXF comes all standard with a cordura rod tube and standard rod bag.

Everything on the sky screams high end fly rod! The premium cork, aluminium reel seat coating, guides, wraps and epoxy work is faultless, and all done perfectly (better than on my G. Loomis). The only issue I had, was that my Tibor reel did not fit all that snugly into the brackets and felt a bit loose, the reel is actually more of a 10 weight reel and this was no problem with any of my other true 9 weight reels though, so probably won’t be much of an issue for most. 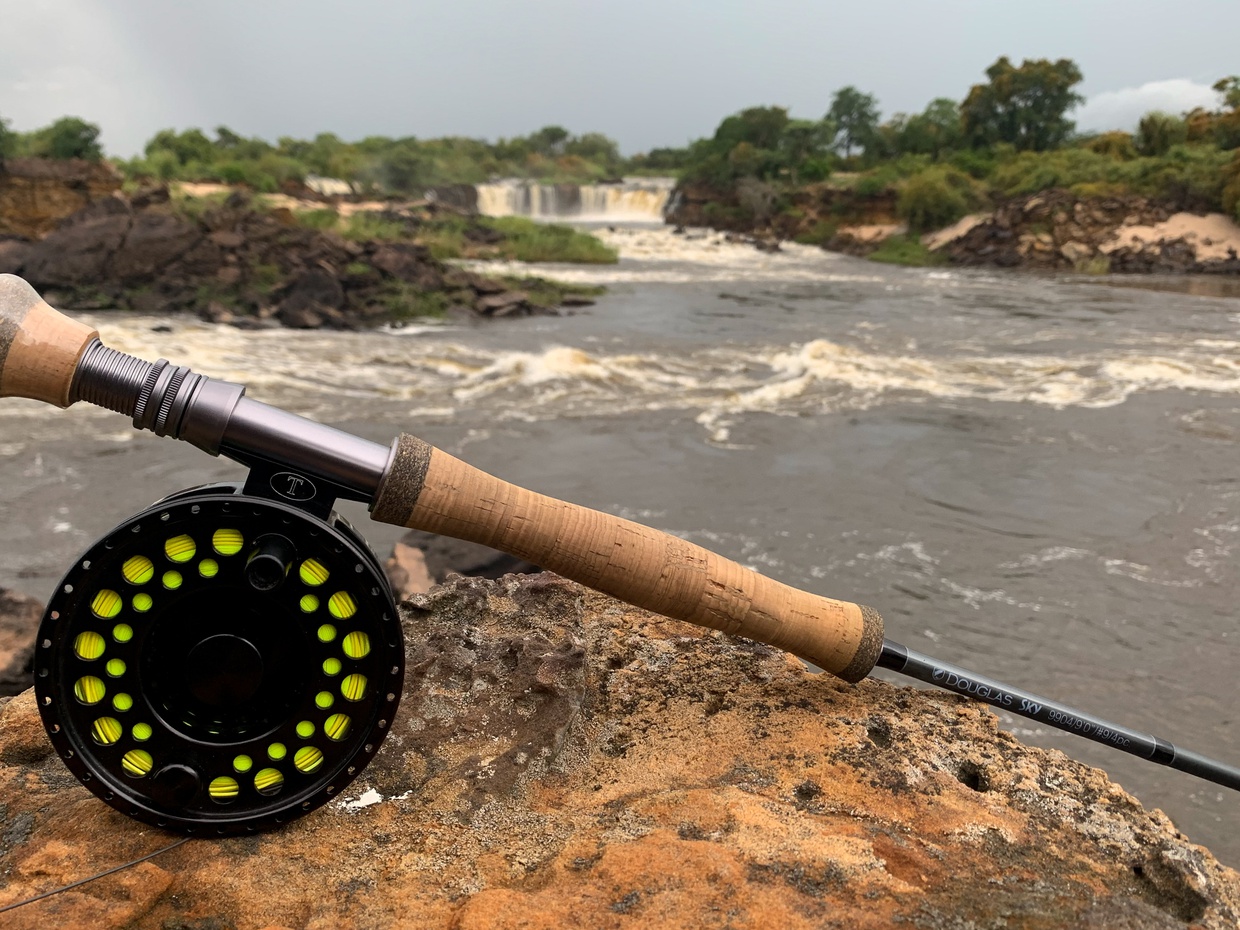 The look of the DXF is once again very standard, but pleasant on the eye, the reel seat had an O-ring that gave a bit of trouble, but I was able to fix it quite quickly and the reel seated very nice on the rod. Most of the wraps on the rod was great and there was only one piece of epoxy work that was not perfect, in other words, the finish on this rod was much better than on most of the other rods in its price range. 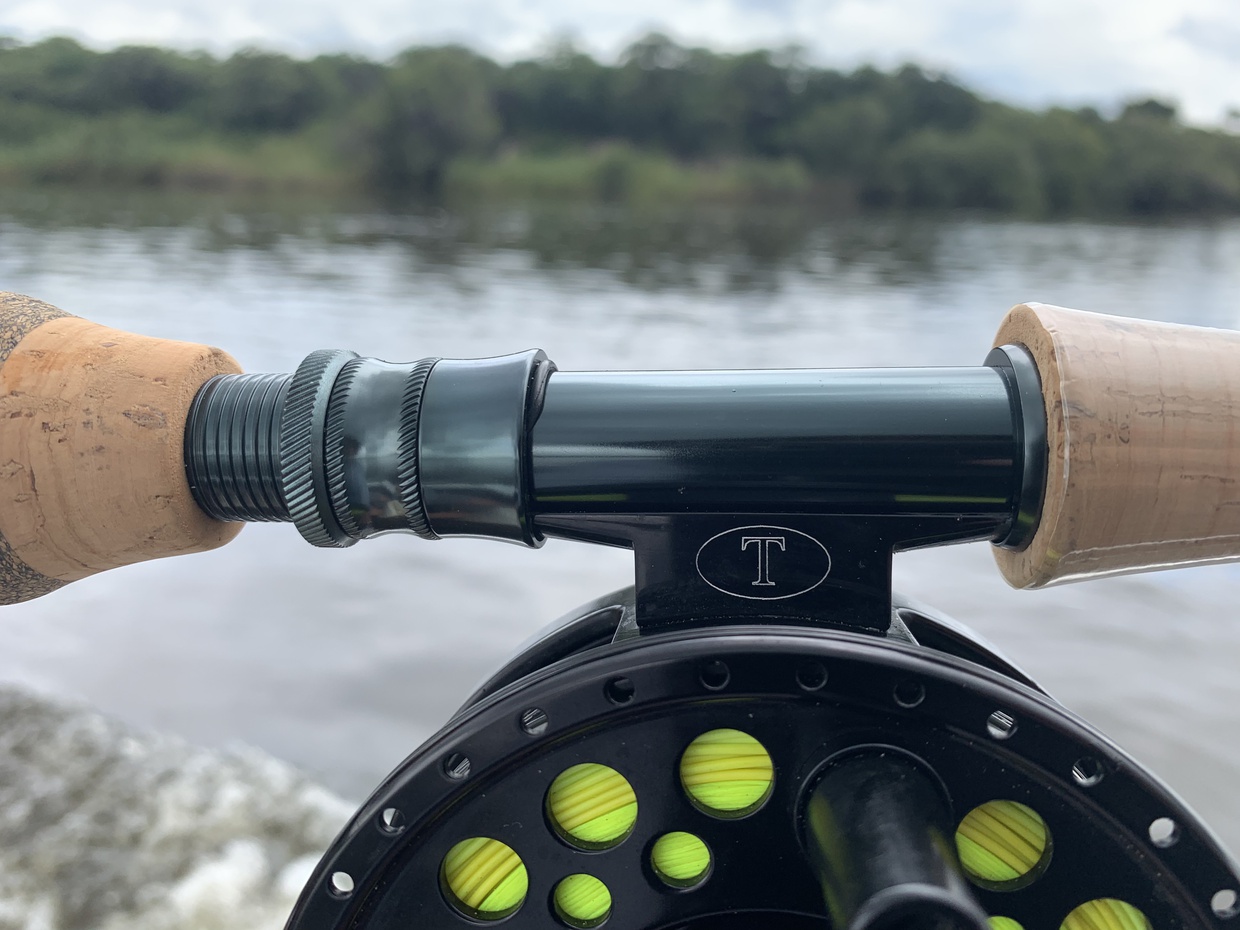 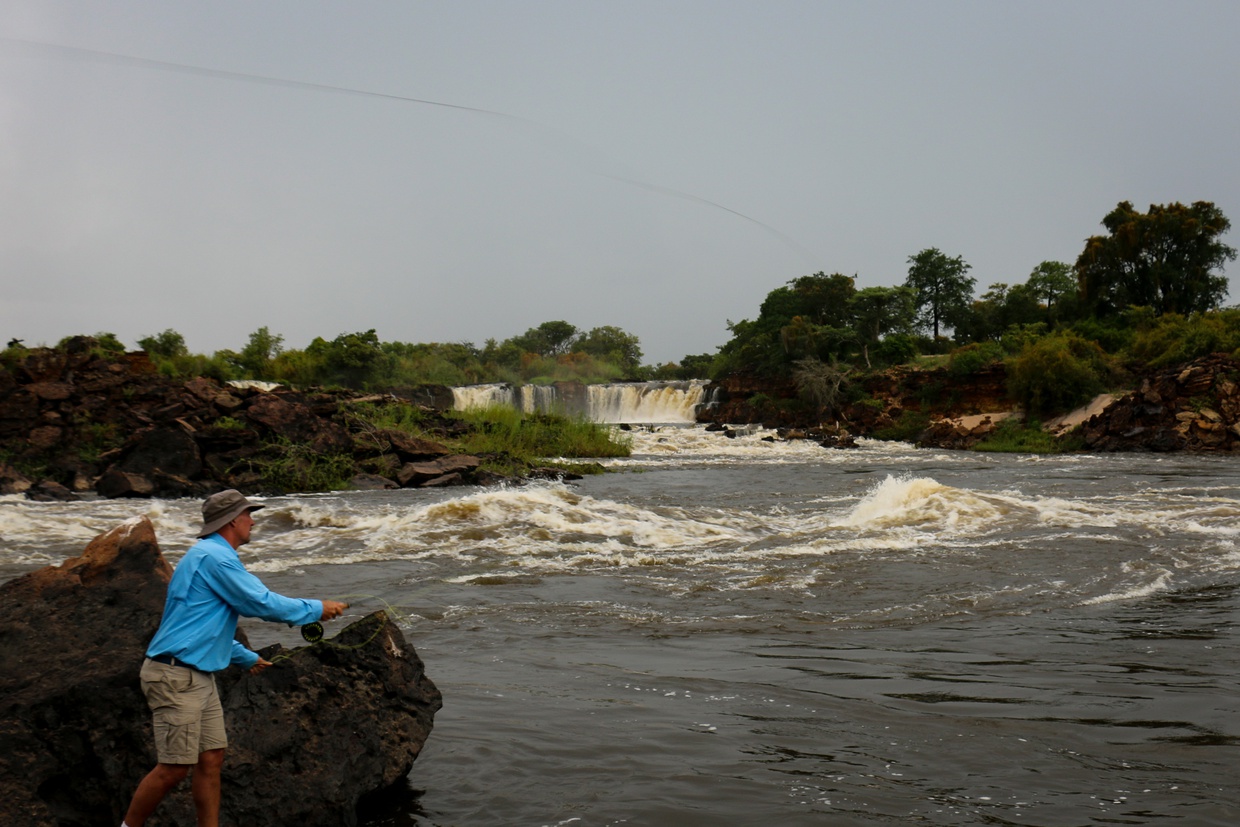 I was very excited to fish with the SKY with its ultra-light weight construction. For the most part on a tigerfishing trip, I would always choose strength over light weight as the rods gets a bit of a beating on the boats and by the fish. This was however a pleasant break from my “normal” rod! The rod feels much more like an 8 weight when fishing and the low swing weight was very noticeable. The rod loads great and at short distance is an absolute machine, it was really easy to put the fly into the smallest of little lies, even from a moving boat. It was incredibly easy to cast up to about 60 feet and I had pinpoint accuracy at these ranges (dare I say, better than my G. Loomis!). when casting further than 60 feet, the accuracy was not as great and further than 80 feet, one had to work hard to get the fly out that far, at these ranges I much preferred my old rod. I think the rod would do well with some extra power at the longest distances, most fishing is not done at these distances though, so most people won’t be bothered much. Over the 2 days, the lower swing weight did make a difference and I was not nearly as tired from casting after a hard days fishing than I would normally be.

The DXF was a big surprize, it fished extremely well at short distances and was very accurate and presented the flies perfectly. The feel was much more like a conventional fly rod and this felt like a true 9 weight. It was quite easy to make a 50-foot cast with minimal back casts, to get the fly into tight spots was a breeze. Further than this was more difficult, and the rod quickly ran out of energy on very long casts. There was a huge difference between the G. Loomis and this rod above 60 feet and the G. Loomis was the hands down winner here, up to that range they were not that far apart though! If you take the price range into the equation, the DXF is an exceptional piece of kit! 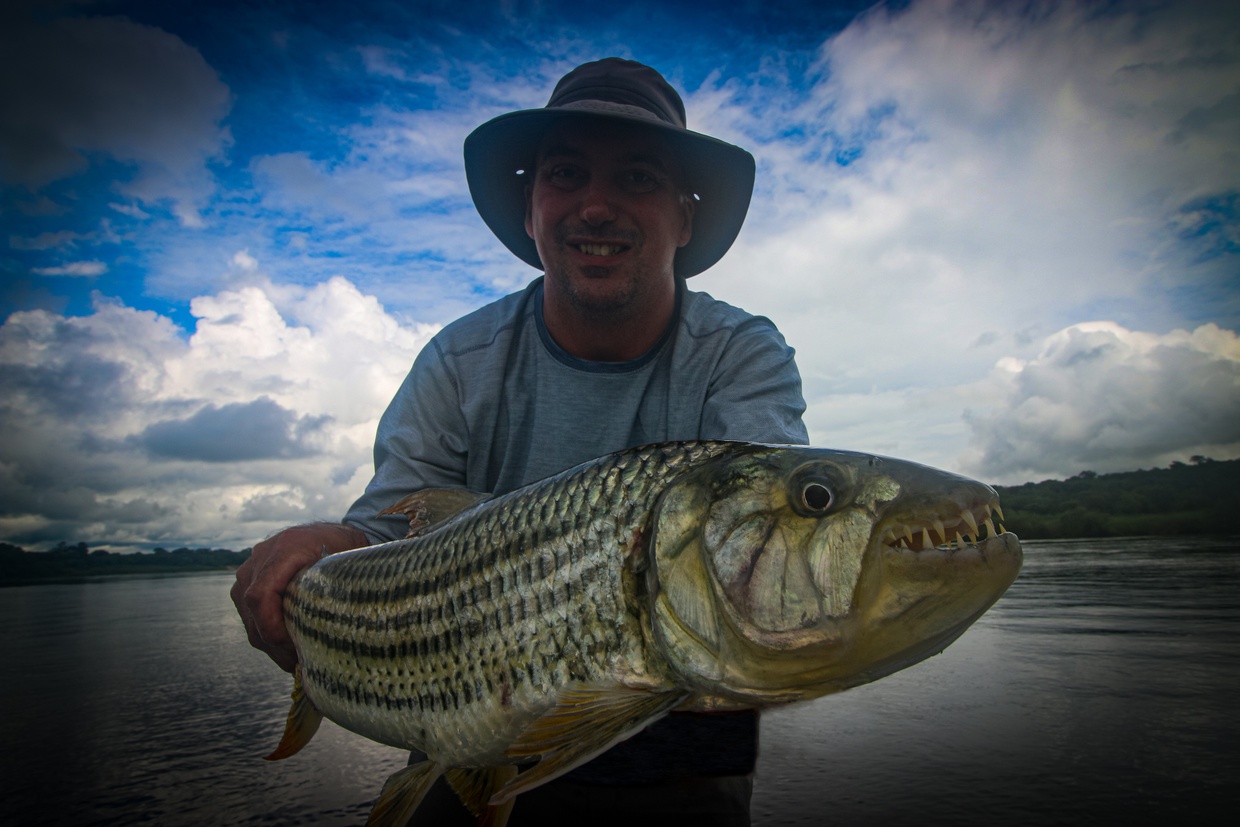 African tigerfish is a formidable opponent on fly and for those not familiar with them, there are three characteristics that make them extra difficult to land on fly. The first of which is its ferocious strike paired with a bony mouth filled with sharp teeth. One needs a rod that can set the hook fast and with power, if you even want to hook one of these and penetrate that hard jaw! The second is its sheer speed and power, this poses obvious issues in trying to tame one of the larger specimens with a fly rod. They live in habitat with plenty of structure and the angler needs to be able to move the fish into safer water to stand a chance of landing it. The third issue is its fondness of fighting in the air. These fish jump and quite often jump close to the boat, you always need to keep the rod tip down and apply enough pressure. It’s not uncommon to lose fly lines or have 30-pound piano wire break mid fight!

Both the SKY and DXF did quite well in setting the hook, I was surprised with how well I managed to hook fish with the SKY, as I thought it would battle here. The DXF was great at this and performed extremely well, maybe due to the little bit less line out into the water due to slightly shorter casts at times. Mid fight, I would honestly have liked a bit more power at times and being used to the backbone of the G. Loomis, both rods was not quite on par with it in my “biased” opinion. They both did well however and I was pleased with both, all fishing is not for tigers and you need a rod that protects a tippet well with some other species. They did protect the tippet better than most rods, but with tigerfish its more force than finesse!

The Douglas SKY is a true “high-end” fishing rod and up to 60 feet, a casting machine, the build quality is on par with its high-end rivals, if not better. The low swing weight is a joy and makes light work of long fishing days. It performs slightly lower on long casts but would still outperform most rods at ranges above 60 feet. It would benefit with a bit more power when fighting tigerfish and at the longer casting ranges.

I would recommend this rod to any angler that wants a great all-round high-end fishing machine that is a bit different from the normal line-up. I would give the Douglas SKY a 9 out of 10, if it had slightly more backbone and power, it would get a 9.5.

·         Would benefit with some more power on ultra-long casts

·         Needs some backbone when fighting tigerfish, for most other species it would fight them great

The Douglas DXF was a great surprise for me as it offers a great rod for its price tag. The build quality is good and overall performance is very good! The rod fished great at close quarters and handled fish well. For me this is one of the top picks for its price and will outperform a lot of its competitors. It is a good rod for tigerfishing, the ideal “backup” rod that might just become your first-choice rod.

For the price, this is an absolutely great fishing tool. I would recommend it to anyone that needs a rod that performs well and might be on a stricter budget. This rod will also serve an angler well that has a high-end rod, but needs a backup(you might end up fishing this rod more than your regular rod though). I would give it a 7.5 out of 10, if I compared it to the SKY and GLX due to lack of performance at the longer casting range and the more standard build quality and looks. If it was compared to its competitors within its price range (a more apples with apples approach), it would receive a 9 to 9.5 out of 10.